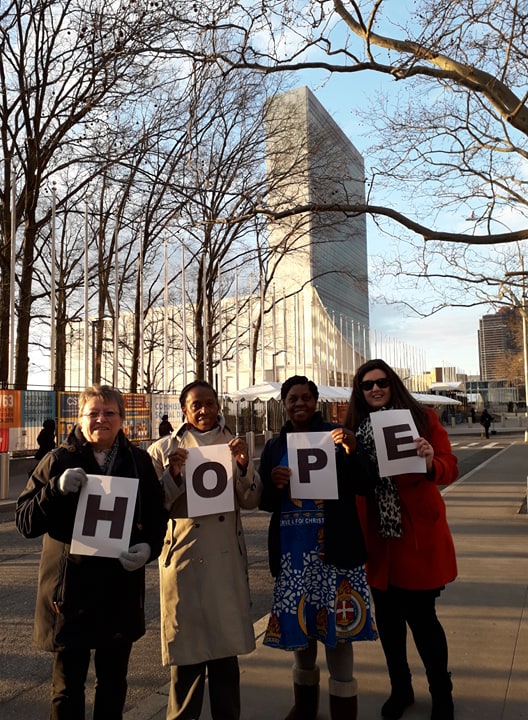 From 9 to 17 March, members from the International President’s Team attended the UN’s Commission on the Status of Women (CSW) in New York City. During this week, the ‘Delegation of Hope’ attended different workshops and events, participated in negotiations on gender policy and networked with other NGOs passionate about turning up the volume of hope for girls. You can read more about the event here.

The team were very active on the GB Worldwide facebook page during the week – here’s some of the photo highlights below.

Sunday was a 14 hr day for the Delegation of Hope (and CSW hasn’t already officially even begin yet!) After attending the Consultation Day, the team got a lift uptown to the Keeping Faith in CSW advocacy training workshop at St James Church near Central Park. This was facilitated by Side by Side; a faith movement for gender justice. 40 faith-based activists attended from all over the world and it was so encouraging that many already knew about GB’s fantastic ministry in their own countries. We hope that this is an encouragement to all our incredible and dedicated leaders; keep on honouring God through serving the girls and communities around you. You are making a difference.

Claire, IVP for Europe, was really privileged to get a front row seat at the opening session of the Commission on the Status of Women at UN General Assembly in NYC. This is often called the ‘Parliament of Humankind.’ More than 9,000 representatives from civil society organizations and NGOs have registered to attend, along with 193 Member States. The annual meeting of the Commission for the Status of Women (CSW) is a force to be reckoned with. GBI’s Delegation of Hope is here to advocate that Christian faith makes a positive difference in the lives of girls and women.

GB’s International President Priscilla attended a CSW ministerial roundtable discussion with senior government representatives from over 20 nations. She shared: “What a privilege it is to represent GB (and you) at the Commission on the Status of Women (CSW). It has been an amazing experience so far and a number of important points have been made. Girls’ Brigade equips girls to be leaders; but let’s remember we’re not training girls for the future but for today. My favourite quote of the day is ’empowering girls and women is allowing them to fly and catching them when they fall.’ I love that GB around the world creates space to do this.”

Quindell (IVP Caribbean-Americas) and Claire (IVP Europe) were invited to a CSW63 town hall event (Q&A) with the UN Secretary General António Guterres, an incredible and credible advocate for gender parity. ‘I am a proud feminist! We all need to be feminists to make sure gender equality is achieved. This Commission could be called the Commission on Power. Gender equality is fundamentally a question of power. We will push back against the push back until gender parity is achieved.’ As the UNSG was a little bit late, the women in the room started singing in their own language. There was an incredible moment when all of the room was singing ‘We will overcome, we will overcome’ just he entered the room. CSW women singing truth to power!

It was really useful to have a tour of the UN building and discover more about the history of this organisation. As you can see, we’re ready and willing for GB to assume a seat on the Security Council… we’re just waiting for an invitation!

The GBI Delegation of Hope has been preparing for CSW for months by setting up meetings. One of our aims is to connect with leaders from other Christian NGOs and the best way to have intentional conversations is over food (of course!). Our first networking dinner was with Amanda Jackson from World Evangelical Alliance, Helene Fisher from Open Doors, Emma Dipper from All Nation’s College and Kristen from A21. It was a great night of conversation which will hopefully lead to action! Thank God for all the Christian-faith based NGOs and organisations who are attending CSW and are advocating for the Good News that Jesus brings. The team has several important meetings planned to explore future collaborations with NGOs; pray that God would open doors of opportunities.

One of the most moving sessions was on religious persecution of Christian women facilitated by the World Evangelical Alliance and Salvation Army. A theatre group of young women from UK performed a number of small drama pieces including an abduction of a girl in Nigeria and used self-portraits of Boko Haram survivors from Nigeria. These stories and the young women’s creativity really engaged our hearts with the issue. GBI would love to bring the stories of our own GB members into the UN arena. Open Doors also revealed that women are often subjected to a different kind of religious persecution than men. Read more about the new report here.

Friday 15 March – wearing the GB logo in the corridors of power and raising hope at the UN!

Attending CSW and gaining consultative status with the UN was an accumulation of a two year process – the Delegation of Hope did not take it for granted. Girls’ Brigade International President Mrs Priscilla Penny from Zimbabwe shares: ‘We thank God for this tremendous opportunity to turn up the volume of Gospel hope for girls in this influential global forum. Being recognised by the United Nations will amplify GB International’s platform to advocate for and with girls on gender justice issues and help empower girls to transform their communities. As one of a few UN recognised Christian organisations focussing on transforming girls’ lives, Girls’ Brigade has a huge opportunity to show how faith can make a difference in the lives of girls.’ It was incredible to represent GB at UNCSW and we hope and pray that many GB members will follow in our footsteps after!

After a busy week with early morning starts at 6am and walking over 10km per day, the team had a debrief time and enjoyed some time in the ‘Big Apple.’

The end of CSW63 – conclusions were agreed by governments!

Over the last two weeks, government delegations and civil society organisations (like Girls’ Brigade negotiated on a set of agreed conclusions prioritising social protections for women including maternity pay, safe transport, access to healthcare and pensions. The aim was to have an agreed set of conclusions by the end of CSW. Unfortunately at the beginning of CSW, we were told that the dial on women’s rights is actually regressing rather than progressing (one major country had already indicated that they no longer ‘reaffirm’ important past pieces of legislation on gender equality). The negotiations were fraught as a result of the current climate and there was no guarantee that the CSW would reach an agreed set of conclusions – this would have been devastating as we head into the 25th anniversary of the Beijing Platform – the first major global policy statement on women’s rights – in 2020. Thankfully, at the end of CSW, there were agreed conclusions reached and the CSW delivered a roadmap on ensuring women’s social protection, mobility, safety, and access to economic opportunities. Thank you God! These agreed conclusions can now be used to keep governments accountable. You can read more here.