It’s been one year since more than 250 young women were kidnapped from their boarding school in Nigeria by Boko Haram. Today, 219 young women remain missing. At least six of them are members of GB. Many feel that all hope is lost for these young women. But we serve a God who can do immeasurably more than we can ask or imagine (Ephesians Ch.3:20).

Join with Girls’ Brigade International and help turn up the volume of hope for the Chibok girls. GB is inviting you to participate in a collective positive action which will ensure that these girls are not forgotten by people in positions of influence.

Making a Card of Hope as an individual, in your GB company or even as part of a church service is simple. Just download the resource pack and cards below. Once you’ve made it, contact your GB national office or national representative to find out if your GB country is collecting them centrally as part of a national campaign. If not, you could send them directly to the head of your government or another appropriate person of influence along with a letter explaining the purpose of the Cards of Hope.

By creating a Card of Hope, you’ll be saying ‘I’ve not forgotten you.’ You’ll also be reminding people in positions of influence not to forget either!
GB International has launched this resource in response to other countries wanting to participate in GB England & Wales’ successful Cards of Hope campaign.

Since January 2015, around 2,500 Cards of Hope have been made and sent in by 100 GB groups in England & Wales. On 17 March 2015, an 18-strong delegation of hope, made up of GB members, leaders and supporters of all ages, went to London to present some of the cards to Baroness Joyce Anelay at the UK Foreign Office, and the door of Number 10 Downing Street, the home of the UK Prime Minister. You can read more here on the Girls’ Brigade England & Wales website.

The 219 young women represent a small fraction of the many thousands of lives which have been affected by Boko Haram’s campaign of violence.

Let’s continue to turn up the volume of hope for the Chibok girls as well as pray for the wider instability in Nigeria.

Will you choose to spread hope today? 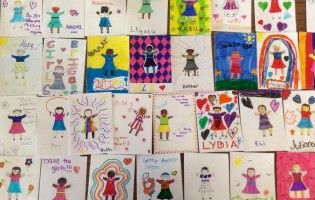