December – Be a Peacemaker 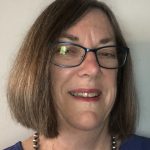 Lorna was National Commissioner for Girls’ Brigade New Zealand from 2004 to 2007.  She grew up in Girls’ Brigade and has served as an officer in her local company and is currently the Northland Area Training Co-ordinator.  She has had the privilege of attending or running six national Fonomarae camps in New Zealand and going to ICGB in Thailand, Ireland, Australia and Zambia.

She lives in Whangarei, New Zealand in a multi-generational household along with her husband, daughter, son-in-law and two grandchildren.  She also has a son, daughter-in-law and grandson who live in Auckland.  Lorna is involved in her local Presbyterian Church and does patchwork for relaxation.

Following ICGB in Zambia last year my husband and I spent a little time in South Africa.  While we were there we visited the Apartheid Museum in Johannesburg and Robben Island in Cape Town where Nelson Mandela was held in prison for 18 years.  We learned a great deal about Nelson Mandela and the rise and fall of apartheid.

One of the learnings was that despite what Nelson Mandela had suffered he sought reconciliation and a peaceful negotiated settlement following his release from prison.  It took absolute determination to choose a peaceful path rather than revenge or violence.

Peacemakers are relationship builders.  Being a peacemaker has the potential to change the lives of those around you.  Everywhere there is conflict:  In the workplace, our communities, our countries and internationally.  Most people will avoid conflict because it is uncomfortable to address it or fear that it will be handled badly.

However, ignoring or avoiding conflict does not deal with the pain which is caused by conflict.  Negotiation and discussion are the greatest implements we have for promoting peace and development.

Building good relationships and friendships takes time and effort.  A little like planting seeds, the results are not seen immediately but over time, with nurturing, they will grow and thrive.

Being a good friend and having good friends reduces stress, contributes to a sense of well-being and prevents loneliness.  It is acknowledged that social isolation and loneliness is a growing problem for many seniors in developed countries.  One of the solutions can be for younger people (Girls’ Brigade members) to reach out and befriend seniors in their family or community.

At times we need to persevere when the friendship hits a rocky patch.  The easy option is to walk away at these times; a good friend will persevere and resolve the issue at hand.

The hardest thing in a friendship can be to admit when we have made a mistake.  While this is hard to do it will do great things for the friendship.  Often, through these experiences we grow in ourselves and become more resilient and a better friend.

Jesus was a peacemaker yet He was not afraid to challenge those around Him and there are many examples of this in the Bible.  In this month of December we celebrate His birth and take time to reflect on His influence in our lives.

“Happy are those who work for peace; God will call them his children” (Matthew 5:9).

“So then, we must always aim at those things that bring peace and that help to strengthen one another’ (Romans 14:19).

“And goodness is the harvest that is produced from the seeds the peacemakers plant in peace” (James 3:18).