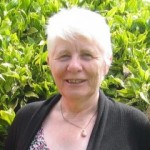 Elected at the International Conference in Perth 2014, to be GB’s International President (2014 – 18) Vivienne Aitchison was previously VP for Europe for eight years and brings a wealth of experience to her new role in Girls’ Brigade.

AN ADVENT MESSAGE 2016 FROM THE INTERNATIONAL PRESIDENT

I would like to be indulgent and share a personal story. It was late in 2013. I had been asked if I would allow my name to forward as a nominee for International President.  I had prayed about it and talked with good Christian friends.  I knew  it was too big a task for me to take on; I had skills, but not  the right ones for this task and there were other people  better  equipped for  the role who I knew God was honing  for the task. So, I said, “NO!”

Then I received an email from a good Christian friend who drew my attention to the story of The Annunciation .  God Himself, in the form of an Angel, visited Mary and gave her a task to do for Him. My friend talked about the way Mary made herself vulnerable in order that God might use her. She challenged me to reflect on this and reconsider my response.

As I re-read this familiar story I realised that my sense of inadequacy was nothing compared to how Mary must have felt.   But the thing that challenged me most was this: when Mary heard what God had planned for her she asked a simple but profound question “How can this be?” And God’s response says it all:

‘The Holy Spirit will come on you, and the power of the Most High will overshadow you.”  Luke 1:35

God had called Mary to a task that humanly speaking she knew was impossible, but the wonder  was that it was not her that had to accomplish the task but God Himself through His Holy Spirit.

………    and so I allowed my name to go forward and here I am serving God in this role, daily dependant on God’s Holy Spirit to lead me.

As we celebrate the season of Advent we look forward to all that God has in store.  In GBI we have chosen    BE EMPOWERED as our theme for 2017.   My challenge to you all in your personal lives and in your GB work is this: If there’s a job to be done, be vulnerable, be brave, say yes and trust. It is not you but God through His Holy Spirit that will make it happen.  So GB friends say yes and…….

and let’s see what God has in store for us!

Christmas blessings to you all!