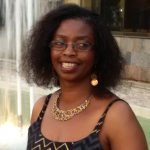 Ruth is the immediate past international president for Girls’ Brigade. She lives in lusaka, Zambia.  I work for the Dreyfus Health Foundation. Ruth is married to Abraham and has two children.

It is often said that, “the line between being courageous and foolishness is very thin”.  Courage is viewed from different lenses and depending on where you are or what lenses you have on, certain actions taken could be seen as either Courageous or Foolishness.

For our reflection, Let us look at some women in the bible and see how courageous or foolish they were:

The story of Tamar is a bold one!  A woman who takes matters into her own hands because those around her are not willing to live by their word.  When society takes advantage of a woman because of the traditions of the land, sometimes, it calls for desperate measures to bring about justice.  To be courageous, may demand that we work outside the box, that we go against the norm, that we stand for justice when everything in us screams to let it be.   Tamar was kept in her father’s house as a widow, with a promise that was not being fulfilled.  She took a bold step, that bordered on foolishness (it may have backfired), but because she was resolved to have her justice from her father in law, she was willing to take the risk, and what a risk that was!  What risks do you need to take to achieve your desired goal in your life?

Our faith or belief gives us confidence that God is in control.  Jochebed, the mother of Moses, could not do anything to protect her son except to completely put her trust in the God of Israel.  Those of you who are mothers will know that it took great courage to put that basket with an infant son in the river.  It was total foolishness that was great Courage.  Being courageous is obeying the inner voice that tells you that, “now” is the time to take a certain action.  We do not often talk about Jochebed, but about her daughter Miriam.  Mother and daughter were both very courageous to pull out that act to work alongside God’s will for Israel.  Courage requires that we take a risk, sometimes, we risk the very thing we want to save!  Are you feeling courageous enough in your called ministry, to risk all?

Go on, be foolish for God and dare yourself to Transform Girls’ Lives as God’s World gets Enriched.   Go, go and be a GB!