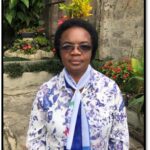 Dorothy is a Secretary/Social Worker by profession. She is a founding member of a community based Association, “Zebra Ladies Association,” whose Aim is responding to emergencies in our Community.

Dorothy is currently the Church Secretary for St. Margaret’s Church, in The United Church of Zambia (UCZ) – one of the largest Protestant Churches in Zambia. She is also Managing Director of Ifintu Auctions Limited, managing Real Estates.

Our story this month of May is about a woman in the Bible called Lydia. (Acts 16). Lydia whose biblical meaning is “A standing Pool”, was a resident of a Turkish town of Thyatira, famous for its guilds of craftsmen, especially the guild of the professionals knowledgeable in the production and sale of expensive purple dye. Lydia was a member of that guild. It is not known how it was that a woman had become one of those professionals, but when she is introduced in the Bible, she had crossed into northeastern Greece and had established her business base in the Roman City of Philippi. As a seller of rare and expensive purple dye, Lydia must have had enough wealth to buy into that franchise.

We continue learning in Acts 16 that, while born and reared to believe in the gods and goddesses of Thyatira, Lydia did not worship the accumulation of gods venerated in her hometown. Instead, she had become a “God-fearer.” She had already taken a major step away from her religious upbringing and had investigated Jewish claims of one God and wanted to know more. (Many “God-fearers” became Jewish proselytes.) We first meet her at Philippi’s riverside with a group of women who had come together there to pray. It was there that Paul and Silas met her and talked with her about Jesus and there she became the first convert to Christianity in Greece.

Convinced of the truth of the Christian gospel and believing that it was for everyone, she bore witness to her entire household and with her, they were all baptized. The apostles stayed on with her for several weeks, instructing her and her household in what she needed to know as a new follower of Jesus. There in her large house she began the first Christian church on Greek soil, welcoming other new believers into the fellowship of faith.

Lydia was successful both in her professional work and in her social or spiritual work nurturing the emerging Greek Church. Most likely the knowledge and connections she cultivated as a trader helped her in her church work, and vice versa. In Lydia we see a woman whose skill and interest is not confined to one limited area. Indeed, we see that both her position in commerce and her knowledge of faith made her uniquely qualified to spearhead the church in Greece.

Lessons we learn from the Character – Lydia

(1) …Lydia responded to the prevailing needs of her time

While there are countless Biblical stories about giving, money and wealth; Lydia challenges us to reflect on our role of being prepared for the moment, seeking sometimes bigger things than ourselves, and being willing to invite others to experience what we have experienced. We are living in the 21st Century where it is rare to see genuine philanthropies around us because the world of capitalism demands that those who have what it takes to rule the world control the economies of scale while those who don’t have remain poorer. This is a challenge each one of us should respond to and make a difference in someone’s life e.g. the vulnerable girl-child, a homeless person or perhaps a Servant of God who may be struggling to make it in life or in their ministry.  As God often reveals different situations to us, it is important we make ourselves available to render our services wherever such needs may prevail. Could it be that in 2022 God wants us to be more hospitable to our neighbours, visitors or even to people who may be passing through our communities, churches or society?  Let us consider the people of Ukraine as a test case.

(2) …Lydia used her time prudently both as a successful business woman and as a follower of Jesus;

Born in Africa over half a Century ago, I grew up in a family of nine children having eight brothers. My own father married, divorced and remarried 4 times until I was 10. Growing up in such a “broken home” taught me to take care of my siblings whom my stepmothers left behind. Being a beneficiary of numerous life lessons Girls’ Brigade offers to young people presented many advantages to me. I joined Brigade very early in life through the positive influence of my friends in the neighborhood – this again made me the only “church-goer” in my entire family. By God’s grace, my childhood life also taught me to multi-task and become more ambitious in life, not allowing the background of my family destroy my dream for a better future. I recall how at some point I received a “beating” from my father when he discovered I had accepted to “baby-sit” in my school teacher’s home without my parents’ permission.  After some negotiations with my teacher, I was allowed to continue my “maid-services” which I performed very well (mornings only) and attended school in the afternoon. This gave me extra income for my personal needs but also taught me to be responsible at a very tender age. Eventually, I graduated from High school with better grades than most of my peers from “successful” homes!

(3) …Lydia was Independent; Philippians 4:2 “Come and stay at my house…….” We can only speculate the magnitude of Lydia’s wealth and independent life she enjoyed and why she stands out alone since in ancient Roman culture, women were known through their men (Barnes, 1995). Doing great things is a daunting task if you depend on your own strength or if you do not believe you are a great person. Lydia was not just a wealthy business woman but was a “God-fearing” person who also loved other people. The lesson for us here individually and corporately is that all of us whom God has called from the world into His marvelous kingdom of light are kingdom builders who must identify our God-given talents and skills; and as often as we have strength use the resources to serve those around us. In this way, we would be pleasing God who enables us to Rise in Strength!