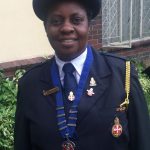 Priscilla was recently re-elected at GBI’s virtual International Conference in 2022, to be GB’s International President for a second term (since 2018). Priscilla was previously IVP for Africa for eight years and brings a wealth of experience to her role in Girls’ Brigade.

Priscilla lives in Harare, Zimbabwe with husband Claudio. As well as all that she does for GB, Priscilla and Claudio also have a busy family life, keeping abreast of all that’s happening in the lives of their four children and five grandchildren!

Jeremiah 29:11 says, “for I know the plans I have for you, plans to prosper you and not to harm you. Plans to give you hope and a future.” This gives us the assurance that God is with us no matter where we are in our lives.

Sarah is the only woman in the Bible whose name was changed by God. She was first called Sarai—meaning “my princess”—but God changed her name to Sarah—signifying “princess” to all (Soncino Commentary, comments on Genesis 17:15).

Sarah was blessed by God to become a royal princess. She would be a mother of nations to come. She would also be a mother of kings of peoples. Royal lineages would come from her. She would be the mother of the royal line of King David from which the Saviour would come. But that plan seemed impossible as Sarah grew old without a son, as Hagar became with child. This really looked like the end of that promise. But God’s promise was not fulfilled by Abraham and Sarah’s efforts or their plan to have a child through Hagar. By a miracle God gave Abraham his promised heir through Sarah.

Finally, when she was 90 years old, God again promised her a son. God can do anything! God is not hindered by physical limits. He transcends all things, and that is why He assertively stated, “At the appointed time I will return to you, according to the time of life, and Sarah shall have a son” (verse 14).

“By faith Sarah herself also received strength to conceive seed, and she bore a child when she was past the age, because she judged Him faithful who had promised. Therefore, from one man, and him as good as dead, were born as many as the stars in multitude—innumerable as the sand which is on the seashore” (Hebrews 11:11-12).

We are children of promise as Isaac was. And Sarah and Abraham are now counted as our ancestors in faith if we have faith. They are counted as the parents of many believing nations. “And if you are Christ’s, then you are Abraham’s seed, and heirs according to the promise” (Galatians 3:29).

May I encourage you to keep the faith no matter where you are in your life and no matter what you are going through.

Let us Rise in strength, The strength of the Lord as we work to impact the lives of girls and young women around the world.