Rise in strength – Mary Magdalene as a role model 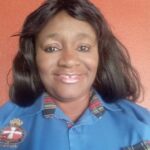 Mrs. Magdalene Apeh is the immediate past National President of the Girls’ Brigade Nigeria, she served from 2015 -2021.

She joined the Girls’ Brigade as a teenager and is still a proud member. During her time in the Girls’ Brigade, she has served in many leadership positions: as a Company Captain, a District Secretary, a State Commandant, a National Secretary and finally, the National President.

Aside from the Girls’ Brigade, she has served with the Child Evangelism Fellowship (CEF) as a teacher with the Children Sunday School. She also taught bible study classes for eleven years with her local church.

She was married to the late Mr. Joseph Apeh and has children and grandchildren. She is a trained teacher by profession and her hobbies are writing and travelling. She is involved in small scale business as a secular job.

Even though she has stepped down as the National President, she continues to hold an advisory role to the current executives and is still dedicated to her company where she teaches girls in her local church.

Magdalene was a woman possessed by seven evil spirits, until Jesus delivered her from that terrible condition.

When one is possessed, they are automatically instruments of the devil. Whatever the devil instructs, the one in such bondage is powerless to resist because they are owned by the devil. That person turns into a chronic liar, a thief, a killer and a destroyer, doing so many harmful and hurtful things both to oneself and those around (John 8:44, 10:10).

At last, Jesus stepped into her situation, He rescued her and turned her into a very important instrument for good, in the hands of the Lord, she became a woman whom many women emulate today.

Like Magdalene, you can come to Jesus with your burden of sin to experience forgiveness. The problems of loneliness, poverty, sickness, injustice, unemployment, a troublesome marriage, rebellious child, addiction(s), and other vices can be laid down at Calvary. Jesus can do it for you as He did for Magdalene.

Do not allow any condition you are in to weigh you down, with Jesus on your side, you can rise up in strength even when it seems hope is gone, for the end of the matter is better than the beginning.

If you have been saved, show your gratitude by being a propagator of the Gospel. You can give, pray, and tell others about the love of God and the impending judgement and punishment.