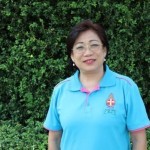 Mrs Tay has recently finished her term as International Vice President for Asia, where she brought tremendous experience to the role.

As a teacher she brings a wealth of knowledge to GB and has travelled around Asia supporting the extension of our mission into Thailand, Cambodia and Indonesia.

This month, we turn our reflections to Queen Esther and learn some lessons from her.

Esther was an orphan who was adopted into her cousin Mordecai’s family. She obeyed his instructions and did not reveal her nationality and family background to anyone when she was brought to the king’s harem at the fortress at Susa. She was placed in the care of Hegai, the Eunuch. Esther’s beauty and sweet demeanor immediately impressed Hegai. She found favour in his sight and was given special treatment. She listened to his advice when she was asked to go before the king and subsequently delighted the king so much that she was chosen to be his queen. She was highly favoured and she continued to be obedient and submissive to those who were placed in authority over her. She was available and found favour with all. God placed her at the right place, at the right time.

In Esther 3: 8 – 14, Haman asked the king to issue a decree for the complete destruction of all Jews on a certain day. Mordecai heard about this, and he sought Esther’s help. Mordecai directed Esther to go to the king and beg for mercy and plead for the lives of all her people, the Jews. Esther knew the law of the land and knew that it would mean death for her to go into the presence the king without his bidding. Mordecai urged Esther to act quickly –

“If you keep quiet at a time like this, deliverance and relief for the Jews will arise from some other place, but you and your relatives will die. Who knows if perhaps you were made queen for just such a time as this?” Esther 4:14

Esther was brave and courageous and arose to the challenge. She knew that it was God who would save them, and she was willing to be used by Him. She asked Mordecai and all the Jews to gather, fast and pray for three days. She and her maids would do so too.

Esther stepped out in faith and was fully surrendered to God’s leading. She made herself available to God and was willing to allow Him to work through her. God’s favour was most certainly with her, and He gave her the boldness to act and plan a strategy.

On the third day, Esther entered the king’s presence and when she was favourably received by him, she invited the king and Haman to a banquet.  Her graciousness was pleasing to the king, and he was willing to give her whatever she asked. That night, the king, unable to sleep, reviewed his book of history and remembered that Mordecai had saved his life by exposing a plot on his life.  The king ordered Haman to honour Mordecai.

During the second banquet that Esther threw for the king and Haman, she revealed that she was a Jew and pleaded for her life and the lives of her people.   In the end, Esther was able to save the lives of her people, Haman is destroyed, and Mordecai is raised to the position of Prime Minister. Together, Esther and Mordecai were able to send out decrees which enabled the Jews to protect themselves and kill their enemies.

What are the life lessons we can draw from the life of Esther?

God was present in the life of Esther and it was He who directed and guided her.

God placed her at the right place, at the right time. Like Esther, we must trust completely in God and be available to take on challenges he sends. We need to “bloom where we are planted”.

As Christ followers, we must live lives that are pleasing to God. We must find favour with God and man.

God is in control of everything. There is nothing that can happen without God allowing it.

We must seek Him through prayer and fasting when we have difficult situations that arise or decisions to make. God works through us and we must be sensitive to His leading, just as Esther was.

God gives us the courage to do His will. We need to step out in faith, in obedience and He will lead us, step by step.

Food for thought: For what purpose has God brought you to this position in life?

Let’s invite the Lord into our lives daily as we look to Him to enable us to rise in strength, to take our place and make a difference, wherever He has placed us.

Let’s find purpose and significance in God’s plan for our lives. Let’s have unshakeable faith in our great God and continually testify of His goodness and love to all we meet.

May God bless us all.