Rise in strength – learn from Abigail 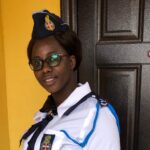 Patricia Sarfo, a native of Ghana and a member of Girls’ Brigade Ghana precisely the Greater Accra Regional council.  Patricia is a member of the Presbyterian Church of Ghana, a lieutenant of 33rd Accra Company and Assistant Secretary of the Greater Accra Regional council. She is a trained teacher by profession and is currently pursuing a bachelor’s degree course at the university of Cape Coast. Patricia loves reading learning new things and teaching children while her passion is to see girl’s lives being transformed and enriched to seek, serve and follow the ways of Christ our Lord.

Patricia loves Girls’ Brigade because through GB she’s learned how to be bold, speak in public and lead little ones to Christ saving grace. She has also learned secretarial skills which is currently aiding her in her endeavours.

In the First book of Samuel, chapter 25 we see a story of a virtuous woman called Abigail, wife of Nabal from Carmel.  Abigail which means ‘father’s joy’ is described as intelligent, and beautiful. Whist her husband is difficult, wicked, and as the meaning of his name implies “fool” so was he.

Abigail’s intelligence and wealth made her appear before David and his men who were rising up against her husband in battle to intercede on behalf of the husband and her family.

By granting the request of David, and pleading for her husband’s life accepting the fact that the Nabal was a man of bad character.

After her husband’s death she accepted the request of David to be his wife.

There are several lessons to be learnt from Abigail’s lesson as members of the Girls Brigade and they are as follows;

HUMILITY. Being humble, was what led Abigail to be the one to rectify Nabal’s egotistic and selfish behaviour towards king David. She was quick to be kind and maintained peace. She looked beyond herself and acted with humility and compassion. She required to make peace with the very one her own husband had infuriated.

GENEROSITY. Abigail did not know the number of men David had or how long the provisions she made would last, but she did think wise to provide enough for the men. And she knew time was of the essence. Our generosity should be timely, that is when its impact would be felt the most.

INTERCESSOR: Abigail had all the reasons not to interfere with something she knows nothing about but she did. She pleaded for forgiveness on behalf of her entire family and God used that instant to show David how wrong it would have been to take matters into his own hands. Abigail’s intercession save David from having his sword smeared with the blood of Nabal (and probably his men who were with him). She asked for forgiveness, for both herself and her husband. We too can stand in the gap for our friend and family so the lord can look down upon us all with forgiveness.

A GUIDE: Abigail guided David to look beyond the moment of gratification which would have been to attack and alienate Nabal and all his house hold, but she reminded him of God’s promises to him. We also have been call to guide those we have charge over. To lead them down the right path so they may find true enrichment of life, and not look to moments of gratifications.

CRITICISM: Abigail openly criticized her husband to David severely. We must take note that no husband or wife or loved one deserves such harsh criticism in their absence or presence. We need not speak harshly of one another, but in love correct each other’s failings and point our beloved into the right direction.